Low intensity IED blast in Jammu and Kashmir’s Pulwama, No loss of life or injury

Saliva-based COVID-19 test to be safe, quick and economical: Study

Congress will fight for respectable number of seats from DMK: Veerappa Moily

Bridge in Uttarakhand, washed away in flash flood, rebuilt in 8 days

I-T raids on Taapsee, Anurag Kashyap: Sitharaman says they were raided in 2013 as well

Rising above the challenges - Roma Puf budded, changing the outlook towards 2020!

Meet Sarvesh Shrivastava: A small town boy who made it BIG in Digital Marketing

Supreme Court issues notice to Centre regarding soldier missing since 1997

Another wet spell in J&K to bring down temperature, may disrupt traffic

Poonawalla warns of delays as US prioritizes Pfizer Covid-19 vaccine

DNA Exclusive: How independent are organisations that hand out `freedom` certificate

Indian-Americans taking over US, says President Joe Biden as they keep getting key positions

India, Bangladesh keen on Japan for partnership on connectivity

Delhi HC directs UP police to give post mortem report of farmer, who died during tractor rally

Cyber policy to factor in threat from state actors

Man does `bhangra` after getting COVID-19 vaccine, netizens shower him with love - Watch 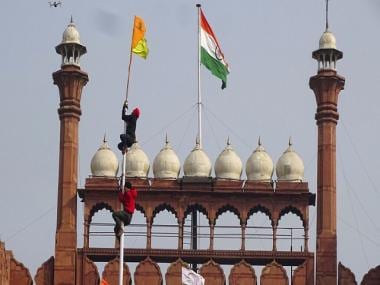 New Delhi: A 29-year-old man who allegedly climbed one of the tombs of the Red Fort during the violence in Delhi on Republic day has been arrested, police said on Monday.

Jaspreet Singh is one of the associates of Maninder Singh, who was arrested last Tuesday for allegedly swinging swords with the intent of “motivating” and “energising” the protesters at the historic monument.

Jaspreet Singh, a resident of Swaroop Nagar in northwest Delhi, was arrested by a Crime Branch team on Saturday.

Thousands of protesters had clashed with the police during the tractor parade called by farmer unions on 26 January demanding repeal of the Centre’s contentious farm laws. Many of the protesters reached the Red Fort driving tractors and entered the monument, and some of them even hoisted religious flags on its domes and a flagstaff at the ramparts.

“Jaspreet Singh is the person who was standing behind accused Maninder Singh and also climbed up one of the tombs located on both the sides of the rampart at Red Fort,” an officer said. “In one of the pictures, he is also seen in offensive gesture holding steel tensile installed at Red Fort.”

According to police, Maninder Singh, 30, had “motivated” six people of the neighbourhood who had accompanied the tractor parade that headed from the Singhu border towards Mukarba Chowk.

Jaspreet Singh is one of the associates and was identified from the pictures and videos in which he was purportedly standing behind Maninder Singh, police said.

Maninder Singh, who works as a car AC mechanic, was arrested in Pitampura in northwest Delhi last week, police had said.

According to the police, Maninder Singh was seen in a video swinging two swords at Red Fort “with the intent of motivating or radicalising and energising violent anti-national elements indulging in the brutal assault and attacking police persons on duty”.

Maninder Singh was “radicalised” by seeing “provoking” Facebook posts of various groups, police had said, adding he would frequently visit the Singhu border and was “highly motivated” by speeches made by leaders there.