Shah Rukh Khan and Taapsee Pannu to star in a social comedy directed by Rajkumar Hirani?

Preity Zinta on IPL 2021: Weird that no teams will play at their home venues

Rajkummar Rao on his Bollywood journey: Don't want to get into rut of repeating myself

Anupam Kher parties with children on his birthday

Bobby Deol says Abbas-Mustan are like family to me

BB14: Rubina Dilaik reveals why she threw water on Rakhi Sawant, says 'she went on crossing every limit'

Taapsee Pannu finally speaks up on IT raids, says 'not so sasti anymore'

MTV Splitsvilla X3 premiere episode: Here’s what you can expect from first episode

How Priyanka Chopra inspired Nick Jonas' single 'This Is Heaven'

Prachi Desai says playing police officer for film 'Silence... Can You Hear It' made her bit nervous

Abhishek Kapoor confesses he 'went numb' when he heard Sushant Singh Rajput passed away. Here's why

Varun Sharma says for actors, cinema halls are nothing short of shrine; shares pic bowing down in theatre

Kangana Ranaut shares struggles of 'Fauji' life as she trains for Tejas; WATCH

Delhi Crime fame Shefali Shah: Ready to play alien, Juliet, or sofa as long as it challenges me

Malaika Arora SLAMMED for jogging in the middle of the road, Kangana Ranaut TROLLED for her remark

Aamir Khan shelves his dream project Mahabharat for THIS reason

Salman Khan fans lash out at Sooraj Pancholi for THIS reason

Ranbir Kapoor and Neetu Kapoor on a search for venues for Ranbir-Alia wedding?

Deepika Padukone REVEALS her daily routine and her day planning 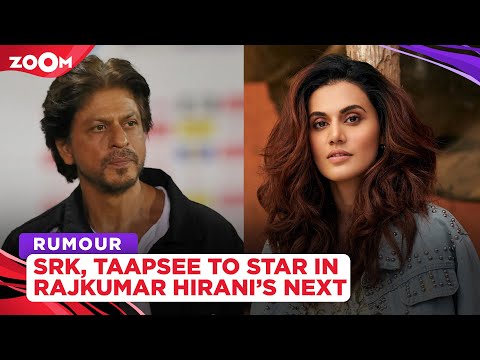 Shah Rukh Khan, who is currently busy shooting for his comeback film Pathan, will reportedly be starring in a film directed by director Rajkumar Hirani. According to reports, Rajkumar Hirani was planning to star King Khan in a film from the Munnabhai series but that idea didn’t work out. And now, Shah Rukh Khan will be starring in his next film which will be a social comedy film based on the immigration issue. It is also said that Taapsee Pannu will be starring opposite Shah Rukh Khan in the film. The two have previously worked together in the critically acclaimed film Badla which was produced by Shah Rukh Khan. Watch the video to know more.