Raveena Tandon on digital debut with Aranyak: My kids feel being on Netflix is cool thing

Kangana Ranaut gives shout out to Tejas director: 'Not easy for outsiders'

Sonu Sood on launching his blood bank app: 'Our 20 minutes can save someone's life'

Primetime Emmy Awards to be held in September

Kangana Ranaut: No architect ready to take my case as they're getting threats from BMC

Happy Birthday Shraddha Kapoor: Rare childhood pictures of the bubbly actress that are too adorable for words

Kartik Aaryan took on role most actors would shy from: Janhvi Kapoor on Dostana 2

Badshah says he prefers lush fields of Punjab to Canada

Aamir Khan shelves his dream project Mahabharat for THIS reason

Salman Khan fans lash out at Sooraj Pancholi for THIS reason

Ranbir Kapoor and Neetu Kapoor on a search for venues for Ranbir-Alia wedding?

Deepika Padukone REVEALS her daily routine and her day planning

Bobby Deol: I was a big star once but things didn't work out

Randeep Hooda excited to spot gangetic dolphin during UP shoot

How will Choocha be in 'Fukrey 3?' Know from Varun Sharma himself!

Golden Globes 2021: Date, time and where to watch international award ceremony in India!

Mohanlal-starrer 'Marakkar: Lion of the Arabian Sea' to release in May

Alia Bhatt's 'sunshine' Sunday is all about cats | see pics 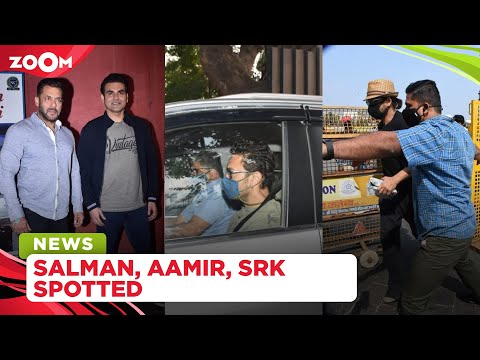 Recently, the three Khans of Bollywood -Shah Rukh Khan, Salman Khan and Aamir Khan were spotted by the paparazzi over the weekend. Salman Khan, who wrapped up his four months-long TV stint, was spotted with his brother Arbaaz Khan. It is reported that Salman is shooting for his guest appearance in his brother’s chat show. Meanwhile, Aamir Khan who is currently busy filming his upcoming film, Laal Singh Chaddha, was spotted house-hunting along with daughter Ira Khan. Shah Rukh Khan was also spotted returning from Alibaug where he was reportedly shooting for his film Pathan. Watch the video to know more.