Abhishek Banerjee and wife Tina Noronha get dream room makeover. Check out how

Babil finds old WhatsApp chat with dad Irrfan Khan, says 'I was almost about to text him back'

John Abraham: Working in action films is like doing an item song for me

The Girl On The Train Twitter Reactions: Netizens are hooked over Parineeti Chopra's mystery-drama

Audience not obligated to love you, you've to give them reasons: Janhvi Kapoor

Ajay Devgn to begin shooting for Gangubai Kathiawadi from February 27

Rashmika Mandanna to move to doing Bollywood movies after buying home in Mumbai?

Arjun Rampal wraps up Dhaakad shoot, calls it 'one hell of a film'

Kartik Aaryan gets a haircut in Manali, shares photo with a quirky caption

SHOCKING! Alia Bhatt was not the first choice for Gangubai Kathiawadi | Celebs pour love on teaser

Varun Sharma on Roohi, 'It is Stree's much crazier sister'

Did Sidharth Malhotra lose his cool at paparazzi because of Kiara Advani?

Kriti Sanon: You can't be cautious and still move ahead in career

Priyanka Chopra Jonas shares memes on herself, says 'thanks guys for making my day'

Eddie Murphy on Coming 2 America: 'I want people to have great experience while watching it' 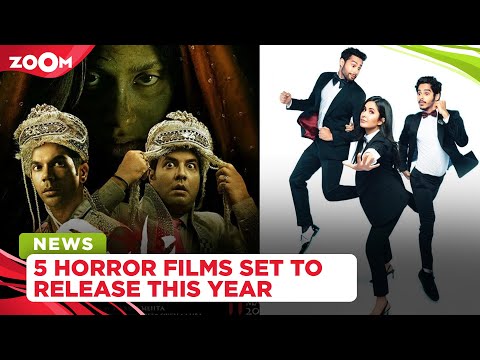 After the lockdown last year, many Bollywood films have seen a delay in their release. However, after the news of theatres re-opening, filmmakers have announced the release dates for their films and many horror-comedy films are lined up for release this year. The Janhvi Kapoor, Rajkummar Rao and Varun Sharma starrer Roohi is all set to release on 11th March, While this is Janhvi’s first horror-comedy, Rajkummar has previously impressed everyone with his role in Stree. Meanwhile, Arjun Kapoor, Saif Ali Khan, Jacqueline Fernandez and Yami Gautam starrer Bhoot Police will be releasing on 10th September this year. Katrina Kaif, who is also exploring the genre for the first time, will be seen next to Ishaan Khatter and Siddhant Chaturvedi in Phone Bhoot. Watch the video to know more.

Gurmeet Choudhary on horror film The Wife: We’re all scared of our wives!