Sonu Sood on helping migrants: 'could do everything because wasn't associated with political party'

All is not well between The Kapil Sharma Show's Krushna Abhishek and Kiku Sharda? Is Govinda the reason?

Deepika Padukone on Ranveer Singh not knowing everything about her, discussing work with him & more

Shyam Benegal looks back as 'Zubeidaa' turns 20: I don't think it did well financially

Nehha Pendse: I haven't received my due as an actor

From Deepika, Kareena to Alia, here's how you can style an oversized shirt like the Bollywood divas

Sequel of 'Sarfarosh 2' will be dedicated to CRPF personnel: Director John Mathew Matthan

Vicky Kaushal accepts the film Mr. Lele which was left by Varun Dhawan

Deepika Padukone interacts with fans, reveals her favourite food & what she does after waking up

Is Janhvi Kapoor's sister Khushi Kapoor gearing up for her BIG Bollywood debut?

B-Town stars gear up for Varun Dhawan & Natasha's wedding which was supposed to be held in Vietnam?

Alia Bhatt gets hospitalized for THIS reason amid Gangubai Kathiawadi shoot

Boney Kapoor confirms Khushi Kapoor's acting debut soon, 'she will be launched by someone I respect'

Why is Saif Ali Khan, Zeeshan Ayyub starrer 'Tandav' trending and what is the controversy all about?

Tandav, Pataal Lok to Padmaavat, films & web series that stirred controversy and found themselves in trouble

Virat Kohli takes to social media for an adorable announcement, says he is a proud father

Divyanka Tripathi recalls when she chose 'dignity' over a TV show

Here's why Sonam Kapoor will NOT be attending childhood friend, Varun Dhawan's wedding in Alibaug?

Mouni Roy to get married to Dubai based banker Suraj Nambiar soon?

Furious with division being created on the basis of religion, says Naseeruddin Shah

Karan Johar to make big announcement about next release; is it about Vijay Deverakonda, Ananya Panday starrer?

Kartik Aaryan wishes his mom on birthday with awwdorable picture

Ananya Panday: 'Khaali Peeli' gave me a character that resonates with me

Amitabh Bachchan recently received one of the best gifts of his life — a vintage Ford Prefect car. He shared a picture of the same and also revealed the story behind it. In the picture, a visibly delighted Big B can be seen posing with a yellow vintage car. He tweeted, There are times when you are speechless .. I am now .. been trying to express, but nothing comes out .. a story of times gone by .. a gesture beyond time”

Shedding light on the story behind the car, the senior Bachchan mentioned in his blog that Ford Prefect was his first family car in Allahabad. He further said that a friend of his read about the car in his previous blogs and on Sunday, he gifted a refurbished Ford Prefect to Big B. What’s more is that the friend even got the same number for the car as the first one.

He wrote, “No one has EVER .. EVER .. done anything like this for me ..! I am so overwhelmed with gratitude and emotion..Have been struggling to put this moment in words or even to express my thanks to him and his family..Moved and beyond .. The eyes, they fill up with water in them.”. 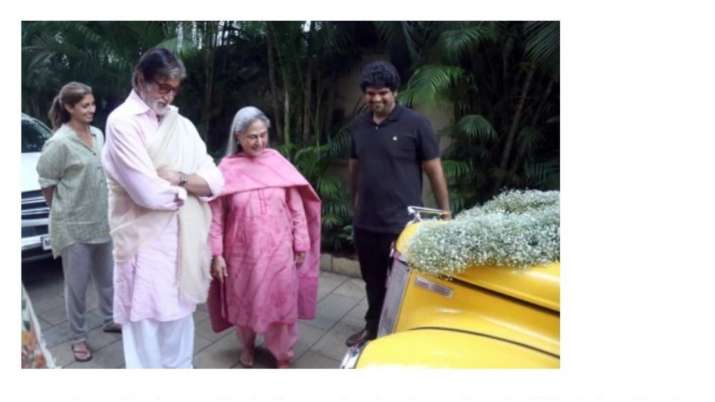 Recently, the Badla actor shared a throwback monochrome picture of hiswife Jaya Bachchan who is seen posing as Swami Vivekananda. The superstar threw some light on the details of the photo saying that it was a glimpse from her Bengali film titled Dagtar Babu. He also mentioned that the film was left incomplete.

Amitabh Bachchan will next be seen with Ranbir Kapoor and Alia Bhatt in Ayan Mukerji’s Brahmastra. He also has Chehre with Emraan Hashmi, Nagraj Manjule’s Jhund, and Gulabo Sitabo with Ayushmann Khurrana.

Holi has seldom been a happy occasion in Bollywood. We list five major examples