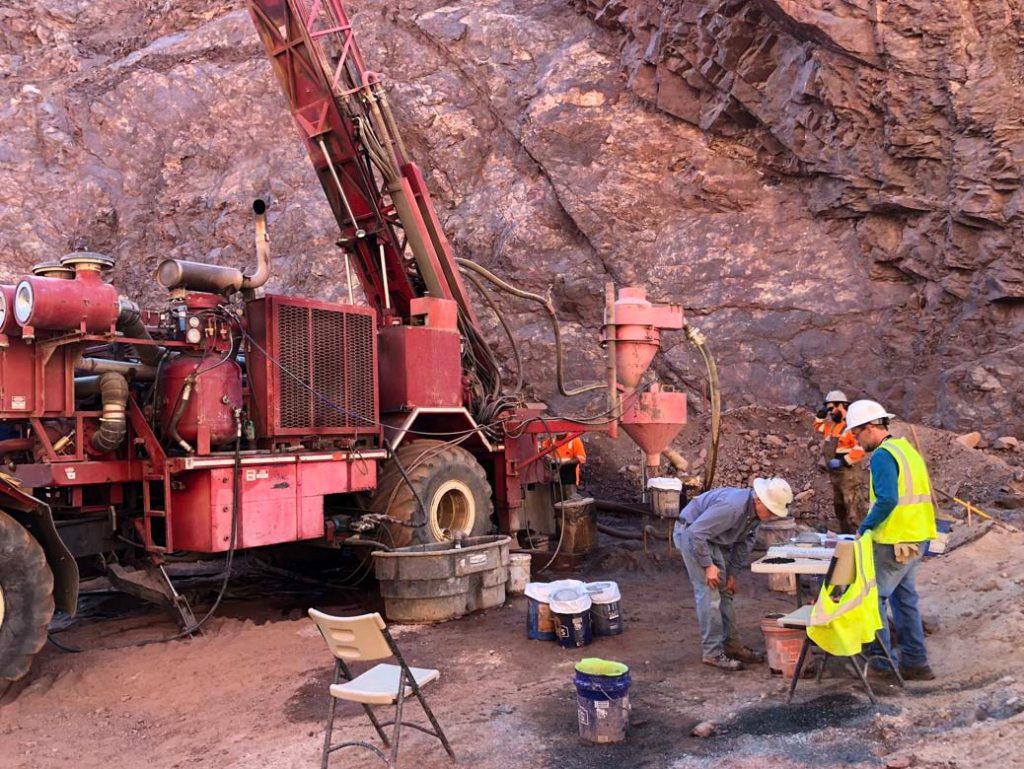 Giulio Bonifacio, CEO, stated: “We are pleased to announce additional drill results from the current underground core drilling program, which continues to demonstrate continuity and extension of several mineralized domains as previously defined. The drilling has shown grades and thicknesses comparable or better to the current resource model with additional assay results pending. Reverse circulation infill drilling will commence in May with close-spaced infill drilling of stopes, which will lead to final stope mine design.”

The underground core hole drilling is complete, having successfully tested the continuity of mineralization in various previously defined mineral domains and previously planned stopes. The core drilling was done in the C and D zones. Infill drilling has commenced with assay results pending. Preliminary indications confirm mineralization as previously modelled while demonstrating continuity and extension of currently defined mineralized domains. Reverse circulation infill drilling of the stopes is expected to commence in May with close-spaced drilling, which will provide detailed information for purposes of stope mining design.

The Copperstone mine project demonstrates significant upside exploration potential that has yet to be drilled within a 50-km2 (12,258 acres) land package that includes past production of over 500,000 ounces of gold by way of an open-pit operation.

The company’s current focus is on maximizing Copperstone’s potential by defining and expanding current resources and further optimizing the mine’s economics for purposes of the restart of gold production as a result of the recent project funding transaction with Star Royalties Ltd. totalling US$18 million.

Barrick to begin production at third Loulo-Gounkoto mine, Mali

TORONTO — SEIU Healthcare and CUPE’s Ontario Council of Hospital Unions are launching nursing week with an urgent plea of support for registered practical nurses (RPNs). The two unions released polling and survey data showing trauma and turmoil experienced by RPNs on the frontline of our healthcare system.

Registered practical nurses are carrying the weight of a pandemic on their shoulders without the financial or emotional support they need. Low staffing levels in our hospitals mean the work is dangerous and causing mental and physical exhaustion. And a reliance on part-time employment means RPNs continue to go without adequate paid sick days and without isolation pay due to COVID-19.

It is incumbent upon Premier Ford’s government and the Ontario Hospital Association to immediately authorize the resources necessary to provide:

POLLING AND SURVEY DATA AT A GLANCE:

“Research show us that denying registered practical nurses fair wages and safe staffing levels mean our hospitals are about to experience an exodus of frontline staff. The burnout is real and decision makers must heed the warnings. Nurses cannot continue to take on more work done by fewer staff—staff who are now carrying the emotional and physical weight of a pandemic. Premier Ford’s government made hallway healthcare worse and allowed wait times to grow, all before the pandemic hit us. In the aftermath of the pandemic, we’re asking for a better deal for Ontario’s registered practical nurses.” Sharleen Stewart, President of SEIU Healthcare

“Our polling paints a stark picture of exhausted nurses who feel unvalued and unsupported. A large number are considering leaving nursing. At every turn, doors have been slammed in their faces. Refused the protective equipment they need to work safely. Not fully vaccinated despite working with Covid-19 patients. Not being paid if they catch Covid-19 at work and must take 10 days off. Told to accept real wage cuts. Nurses have really stepped up for the people of Ontario during this crisis and they deserve so much more from their government than platitudes.” Michael Hurley, President of CUPE’s Ontario Council of Hospital Unions

UK rail operators withdraw some Hitachi trains due to cracks

Author of the article: LONDON — The British government asked the rail industry on Sunday to urgently announce how it was going to deal with disruption to services after several operators were forced to withdraw part of their fleets because of cracks discovered on certain trains. Checks carried out on Saturday on Class 800 Series…

LONDON — The British government asked the rail industry on Sunday to urgently announce how it was going to deal with disruption to services after several operators were forced to withdraw part of their fleets because of cracks discovered on certain trains.

Checks carried out on Saturday on Class 800 Series trains made by Japan’s Hitachi identified cracks on part of the chassis of some trains, prompting operators including GWR and LNER to remove all their trains of that class.

“I have directed the rail industry to urgently set out a comprehensive plan to ensure services can safely resume as soon as possible,” Rail Minister Chris Heaton Harris said in a statement.

“I expect operators to explore all options for replacement services to help people complete their journeys, and have asked Hitachi for a safety inspection plan, as well as longer term repair strategy.”

Hitachi apologized to passengers and operators, saying the trains had been withdrawn as a precautionary measure.

“We are working as quickly and safely as possible to investigate the issue across the remainder of the fleets,” it said in a statement posted on Twitter.

GWR, which operates services between London and various destinations in western and southwestern England and in Wales, said it had canceled a significant number of its services.

It said it expected disruption to continue on Monday and into the week ahead.

“The problem continues to be investigated by Hitachi and once trains have been checked and cleared, we hope to be able to release them back into service as soon as possible,” said GWR, which is owned by FirstGroup.

LNER, which operates services between London and cities in eastern and northeastern England and in Scotland, gave similar information on its website, urging passengers not to attempt to travel on Sunday and promising to rebook or refund tickets.

The rail minister warned passengers that disruptions were likely to continue “for some time,” calling on operators to organize replacement bus and coach services to help alleviate the problem. (Reporting by Estelle Shirbon Editing by Frances Kerry)

Jerusalem tense over evictions and holidays

Author of the article: JERUSALEM — East Jerusalem has seen nightly clashes during the Muslim holy month of Ramadan, with Palestinians pitted against Israeli police and settlers. The issues and the scale of the protests have varied, covering religion, land and politics, but running through them all is the core conflict between Israelis and Palestinians…

JERUSALEM — East Jerusalem has seen nightly clashes during the Muslim holy month of Ramadan, with Palestinians pitted against Israeli police and settlers.

The issues and the scale of the protests have varied, covering religion, land and politics, but running through them all is the core conflict between Israelis and Palestinians over the city that has sites sacred to Judaism, Islam and Christianity. Here are some of the factors that have brought Jerusalem to near boiling point:

When did the protests start?

From the beginning of Ramadan in mid-April, Palestinians clashed nightly with Israeli police who put up barriers to stop evening gatherings at the walled Old City’s Damascus Gate after iftar, the breaking of the daytime fast.

Palestinians saw the barriers as a restriction on their freedom to assemble. Police said they were there to maintain order.

Why did the violence flare up again?

An Israeli Supreme Court hearing was due on May 10 in a long-running legal case about whether several Palestinian families would be evicted and their homes in Sheikh Jarrah, a neighborhood near Damascus Gate, given to Israeli settlers.

Some settlers have already moved into the street affected – living next door to the Palestinians facing possible removal.

As the court hearing neared, Palestinians and left-wing Israelis began holding larger demonstrations, saying more evictions could cause a domino effect throughout the overwhelmingly Palestinian neighborhood.

Sheik Jarrah also contains a site revered by religious Jews as the tomb of an ancient high priest, Simon the Just, leading to frequent tensions between Palestinian living there and religious Jews visiting it.

The case, in which a lower court ruled that the land in question belonged to Jews in East Jerusalem before the 1948 War, has gathered domestic and international attention, amid criticism of Israeli settlements in East Jerusalem.

On Sunday the Supreme Court hearing on the evictions was postponed, pushing at least one flashpoint past the end of Ramadan and allowing more time for a resolution. A new session will be scheduled within 30 days.

Monday is Jerusalem Day, Israel’s annual commemoration of its capture of East Jerusalem during the 1967 war. The event usually sees a march through the walled Old City by Jewish pilgrims, including ultra-nationalists, which could be another flashpoint.

Why is Jerusalem so sensitive?

At the heart of Jerusalem’s Old City is the hill known to Jews across the world as Temple Mount – the holiest site in Judaism – and to Muslims internationally as The Noble Sanctuary. It was home to the Jewish temples of antiquity. Two Muslim holy places now stand there, the Dome of the Rock and Al-Aqsa Mosque, the third holiest place in Islam.

Christians also revere the city as the place where they believe that Jesus preached, died and was resurrected.

Israel sees all of Jerusalem as its eternal and indivisible capital, while the Palestinians want the eastern section as a capital of a future state. Israel’s annexation of East Jerusalem is unrecognized internationally.