'Toolkit Or Sledgehammer - Can’t Have A Run In India': Harish Salve On Global Anti-India Conspiracy

G-23 row: Congress says leaders respected but should do more in elections

Covid-19 vaccine: Private hospitals can charge up to Rs 250 per dose, free at govt ones

IndiGo to operate select domestic flights from T1 in Mumbai

'On 2nd May, hold me to my last...': Prashant Kishore tweets day after EC's poll dates announcement

Fire at cosmetics factory in Delhi's Pratap Nagar, one dead

UP: Woman gangraped, set on fire by father, son in Sitapur

SUV with explosives found near Ambani's house had been stolen, say Cops

After tractor march, now farmers' to hold cycle rally from Kanyakumari to Kashmir on March 12

Has this been done on PM Modi's advice? Mamata questions 8-phase election in Bengal

Bengal Polls 2021: ISF gets 30 seats in alliance with Left, Congress but pushes for more

Planning to visit Siddhivinayak temple? Must check THIS new rule

'This is just a trailer': Threat letter found in car laden with explosives near Mukesh Ambani's Antilia

Election Commission to announce election schedule for 4 states and Puducherry at 4:30 PM

'Dharam sankat’, says Nirmala Sitharaman on when will petrol and diesel rates fall

Rahul Gandhi Protests Against CAA In Assam Ahead Of State Polls, Claims 'It Won't Be Implemented'

Terror strike Averted In Jammu, 7 Kgs Of IED Recovered By J&K Police Near A Bus Stand

Greta Thunberg-Disha Ravi Links To Be Probed In 'Toolkit' Case

Watch | When Mamata Banerjee tried her hands at driving e-scooter

Can We Not Say Anything For A While?: Disha Ravi-Greta Thunberg's 'Toolkit' WhatsApp Chat Accessed 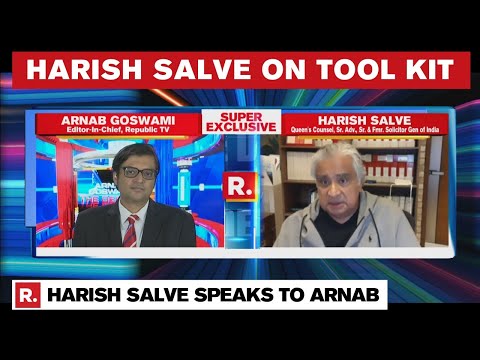 Speaking exclusively with Republic Media Network’s Editor-in-Chief Arnab Goswami on Wednesday, Harish Salve, Queen’s counsel, Senior Advocate of Supreme Court and former Solicitor General of India delved on the toolkit plot against India. Taking a dig at foreign celebrities for commenting on the farm protests, he asserted that it is the Centre’s responsibility to ensure that the scourge of Khalistani terrorism doesn’t raise its ugly head again. Nailing the role of Canada-based individuals fueling violence in India, the Queen’s Counsel lamented that some environmental activists were indirectly allowing terrorists to infiltrate genuine protests by farmers.

Weighing in on the controversial toolkit which contained detailed instructions to target the Indian government and a few Indian corporate enterprises, Salve highlighted that the talk of “physical action” hinted at a sinister conspiracy. Arguing the need to treat the Republic Day violence with utmost seriousness, he expressed differences with other intellectuals who have professed a softer line. On this occasion, the senior advocate also attacked a section of the intelligentsia for looking at the judiciary in binaries.