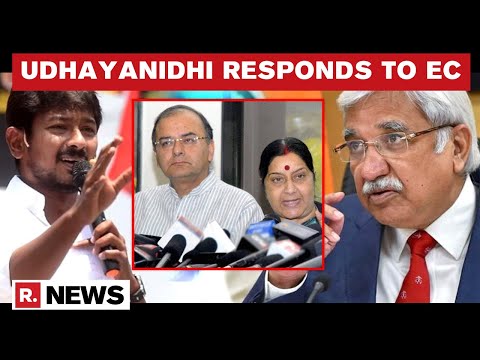 DMK youth wing secretary Udhayanidhi Stalin on Wednesday denied having violated the Model Code of Conduct by his remarks on late BJP leaders Arun Jaitley and Sushma Swaraj. A day earlier, the Election Commission had issued him a show cause notice after BJP complained about his statement “Sushma Swaraj and Arun Jaitley both died unable to tolerate pressure and torture given by Prime Minister Modi”. In his response to the EC, Stalin dubbed the allegations “false” and requested the EC to furnish a transcript of his entire Dharapuram speech dated March 31 and a copy of BJP’s complaint so that he can furnish a proper reply.

The DMK youth wing secretary claimed that he was responding to PM Modi’s allegation that he reached high political office by adopting shortcut methods. Maintaining that he has no personal ill-will towards the PM, Jaitley and Swaraj, he stressed that the speech must be understood in its entirety. Urging the EC to accept this interim explanation, he lamented that the poll body hadn’t taken any action against persons who commented on his personal life and family members including the late M Karunanidhi.

In his formal explanation, the DMK’s Chepauk-Triplicane candidate observed, “I said that I was having the list of leaders sidelined by him (PM Modi). I gave the names of Mr. Advani, Mr. Yashwant Sinha, late Mrs. Sushma Swaraj and late Mr. Arun Jaitley. The words ‘pressure and torture’ were not used by me in the said context as sought to be projected in the show cause notice and these English words cannot be read in isolation without referring to the entire text of the speech. My entire speech was in Tamil and the meaning conveyed in Tamil is totally different from the above words in the notice sent by you.” Catch all the live updates on Republic TV.

Watch: Major fire breaks out at market in Mumbai’s Kurla, no death reported