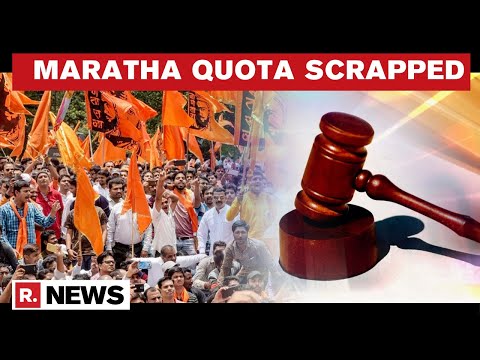 #SupremeCourt #MarathaReservation #MarathaCommunity #RepublicTV
New Delhi, May 4 (PTI) The Supreme Court will on Wednesday pronounce its verdict on a batch of petitions challenging the Bombay High Court verdict which had upheld the grant of reservation to Marathas in admissions and government jobs in the state.

A five-judge constitution bench headed by Justice Ashok Bhushan will pronounce the verdict.

On March 26, the top court had reserved its verdict on the batch of pleas.

The lengthy hearing on the issue also saw submissions being made on whether the landmark 1992 Indra Sawhney verdict (called the Mandal judgement), which put a cap of 50 per cent on reservations, requires re-consideration by a larger bench.

The constitution bench had commenced hearing arguments in the matter on March 15. The top court had said that it proposes to consider issues, including whether the judgement in the Indra Sawhney case needs to be referred to or requires re-look by a larger bench “in the light of subsequent constitutional amendments, judgments and changed social dynamics of the society”.

The high court, while upholding the law in June 2019, had held that 16 per cent reservation was not justifiable and the quota should not exceed 12 per cent in employment and 13 per cent in admissions.

The Centre had argued in the top court that Maharashtra has the legislative competence for granting reservation to Marathas and its decision is Constitutional as the 102nd amendment does not denude a state of the power to declare its list of Socially and Educationally Backward Classes (SEBC).

The 102nd Constitution amendment Act of 2018 inserted Articles 338B, which deals with the structure, duties and powers of the National Commission for Backward Class (NCBC), and 342A dealing with power of the President to notify a particular caste as SEBC as also of Parliament to change the list.

Solicitor General Tushar Mehta, appearing for the Centre, had said that in its view, the SEBC Act 2018 of Maharashtra granting reservation to people of the Maratha community in the state in jobs and admissions is “Constitutional”.

“The Centre is of the view that the Maharashtra SEBC Act is constitutional. We construe Article 342A gives enabling role to Central government to determine the SEBC,” Mehta had said, adding that the Centre adopts the submissions of the Attorney General and it should be considered as the view of the Union government.

On March 18, Attorney General K K Venugopal had told the top court that the 102nd amendment to the Constitution does not deprive state legislatures to enact law determining the SEBC and conferring benefits on them.

The apex court had on September 9 last year stayed the implementation of legislation and referred to a larger bench the batch of pleas challenging the validity of law, but made it clear that status of those who have availed of the benefits would not be disturbed. PTI MNL SJK MNL RKS RKS
Republic Bangla is now LIVE ► https://youtu.be/ZbqFXifTAUw