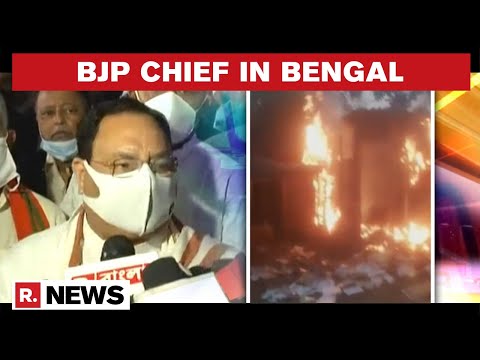 BJP National President JP Nadda on Tuesday was back in Kolkata in light of the post-poll violence in West Bengal. Nadda said he will head to 24 Parganas first and then meet the party workers who have been the victims of the post-poll political violence after CM Mamata Banerjee returned to power as election results were declared on May 2, giving the incumbent TMC a clear majority for the third term.

While addressing the media after landing at the Kolkata International Airport, Nadda said, “Such intolerance has not been witnessed before as we are seeing now. The way (BJP) workers are being attacked, I have come to personally be with them in this hour of crisis and fight with them in a democratic manner. We are committed to fighting this ideological battle and the activities of TMC which are full of intolerance.”