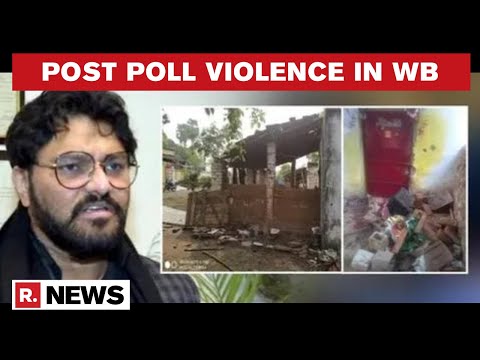 #WestBengal #WestBengalViolence #BabulSuprio#MamataBanerjee #RepublicTV
A day after Trinamool Congress’ victory in West Bengal Assembly Elections, Union Minister Babul Supriyo fumed over political violence in Asansol by the TMC and shared a video of the incident. In a series of tweets, he slammed the TMC and WB CM Mamata Banerjee for violence in Bengal and assured that the BJP will continue to fight.

Supriyo said, “Presenting snapshots of Didi’s (Mamata Banerjee) Victory Celebration by her TMC party and this is only from Asansol (to be continued). Yes ‘Didi’, sure has created History and we accept your victory but that doesn’t change your ‘chequered’ history of violent politics.”

He added, “And the terror you have allowed your party to unleash throughout Bengal, with your police playing Mute Spectator, shall be fought by us BJP with renewed vigour. 3 to 78 is no mean feat anyway. Look back at your own history- like you fought the Left, we’ll fight you too.” He further said, “We the BJP have won several states but none of them saw what we witness after your win, be it 2016 or 2019. New History shall be written. ‘Sitaron’ today par usske aage jahan aur bhi hai. Will Rahul Gandhi, Omar Abdullah, Uddhav Thackeray, Akhilesh Yadav will be kind to comment on this?”

Supriyo lost to TMC’s Aroop Biswas
Union Minister Babul Supriyo on Sunday refused to wish Mamata Banerjee on retaining Bengal or accept the people’s mandate. Supriyo lost to TMC’s Aroop Biswas who won 1,00,491 votes while Supriyo won 51,064 votes. The biggest face-off in phase five was between Union Minister Babul Supriyo and sitting TMC minister Aroop Biswas for Tollygunge – the heart of the Bengali film industry. Falling under the Jadavpur Lok Sabha seat, the Asansol MP had staged a protest after being gheraoed by a section of students in the Jadavpur University for nearly six hours.
Republic Bangla is now LIVE ► https://youtu.be/ZbqFXifTAUw