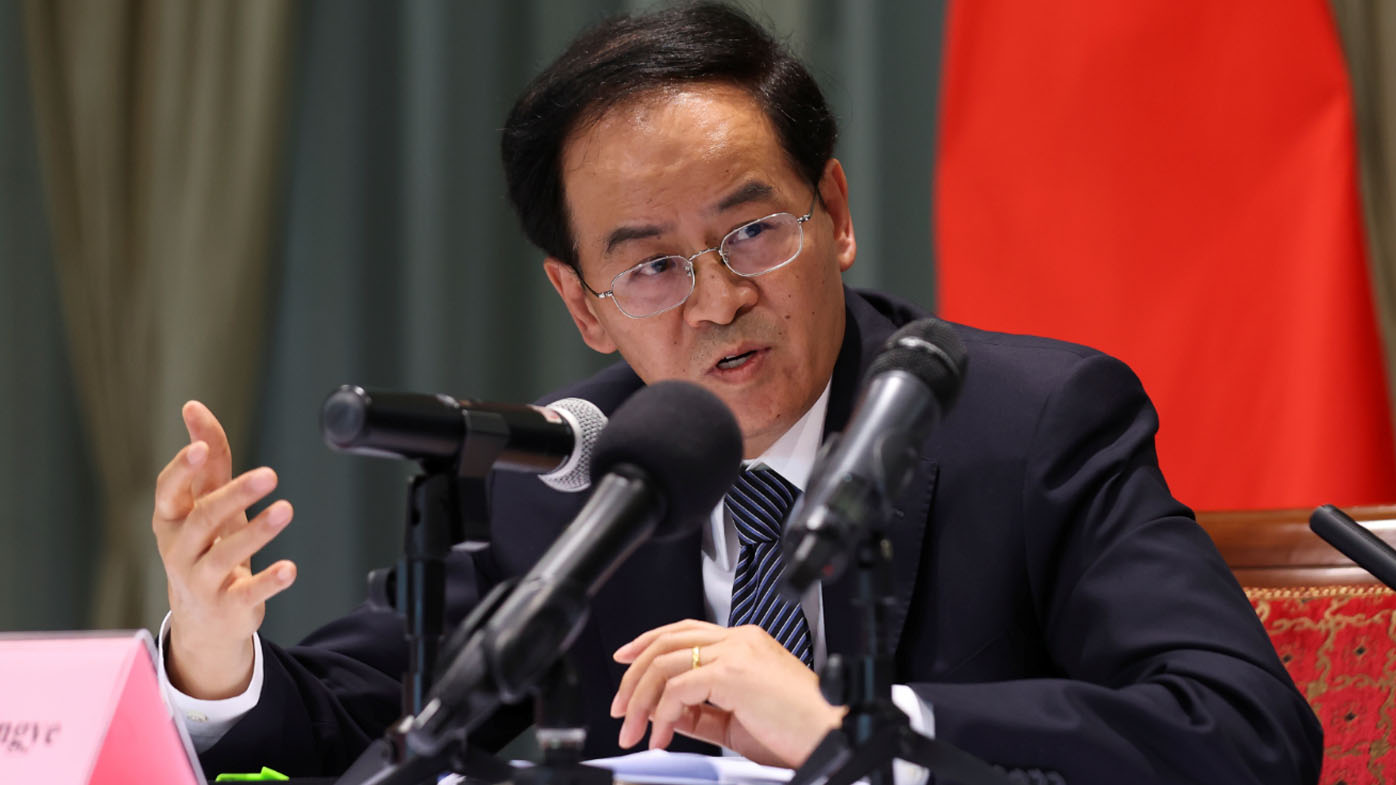 Australia has been warned China will “respond in kind” if Canberra sanctions Beijing over allegations genocide against the ethnic minority Muslim Uyghurs.

Fronting a bizarre conference, Ambassador Cheng Jingye said China will not “swallow the bitter pill of interfering or meddling in China’s internal affairs”.

Ambassador Cheng was joined by government officials beamed in via Zoom from Xinjian for a two-hour media conference in Canberra, dismissing allegations of human rights abuses as “fake news” and “lies”.

The media event featured heavily-produced propaganda-style videos about how life could look in the autonomous region of north-western China.

Also beamed in were residents of Xinjiang, spruiking life in what was called “a wonderful land”, to dispel and dismiss a variety of allegations with have centred on the Chinese government and the people of the autonomous region.

Last month the US, Canada, the European Union and the UK imposed sanctions on Chinese officials, in what they described as “co-ordinated action” designed to send “a clear message about the human rights violations and abuses in Xinjiang”.

At the time Australia issued a joint statement with New Zealand stopping short of issuing sanctions but saying “there is clear evidence of severe human rights abuses that include restrictions on freedom of religion, mass surveillance, large-scale extra-judicial detentions, as well as forced labour and forced birth control, including sterilisation”.

On Wednesday, the Chinese Ambassador dismissed that view as “lies” and “rumours” warning if Australia follows its international allies it would make an already frosty relationship, colder.

“We will not provoke, but if we are provoked, we will respond in kind,” Ambassador Cheng said.

It has been claimed up to one million Uyghurs are being held in what the Chinese government calls re-education camps. 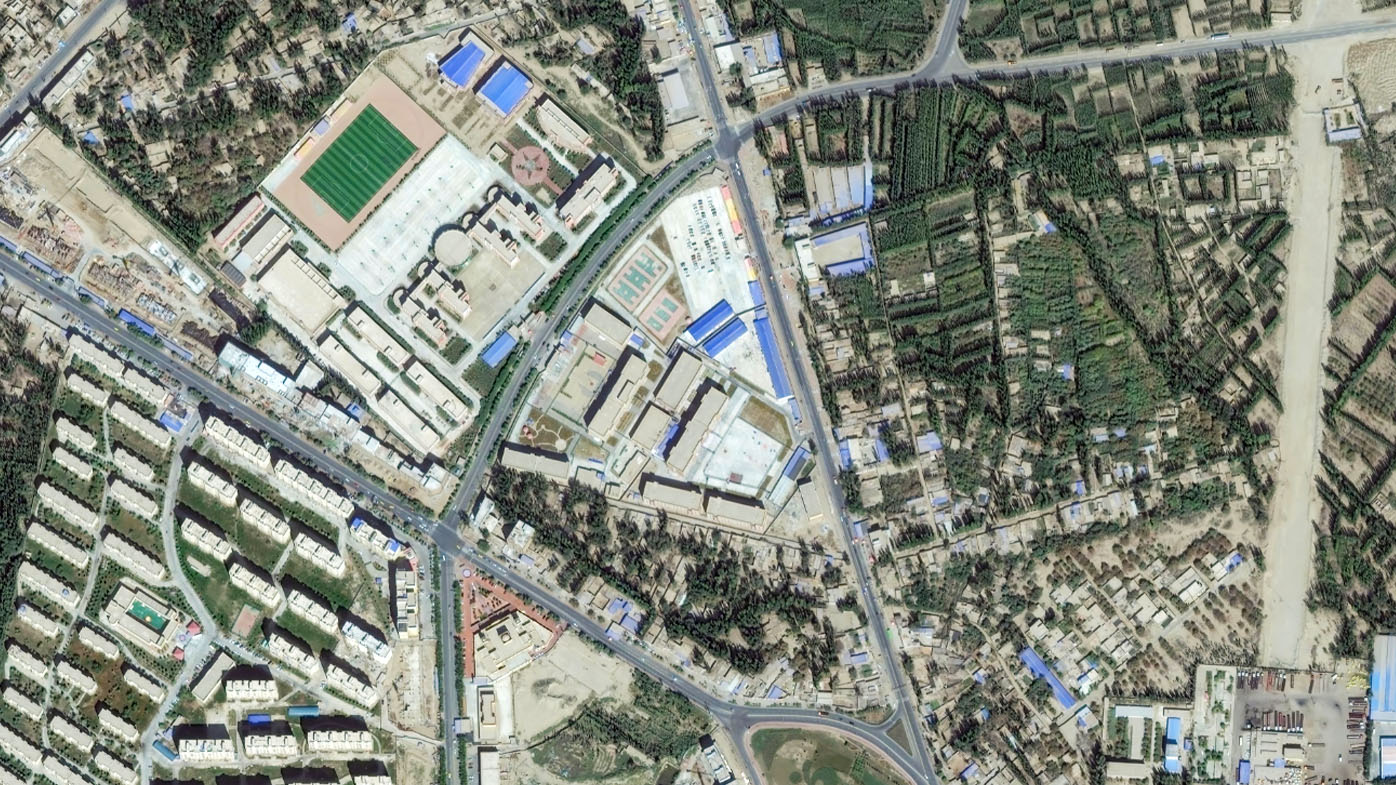 It’s a number China has denied and today again rubbished.

Government official Xu Guixiang – who is in Xinjiang – was asked how many people were being held in camps there.

“Xinjiang already has re-education centres there are no things like concentration camps,” he responded to Australian journalists.

Uyghurs who live in Australia have expressed concerns for family back home.

Marhaba Yaqub Salay has not spoken to her sister in more than two years.

Eight years ago, Marhaba’s sister transferred money to her parents in Australia to buy a house.

In April 2019 she was detained accused of “giving material support to terrorist activity”.

Marhaba has grave concerns for her welfare.

“Australia, please recognise genocide because Uyghur people are suffering from them and CCP (Chinese Communist Party) want to wipe all of us in our homeland,” she told 9News. 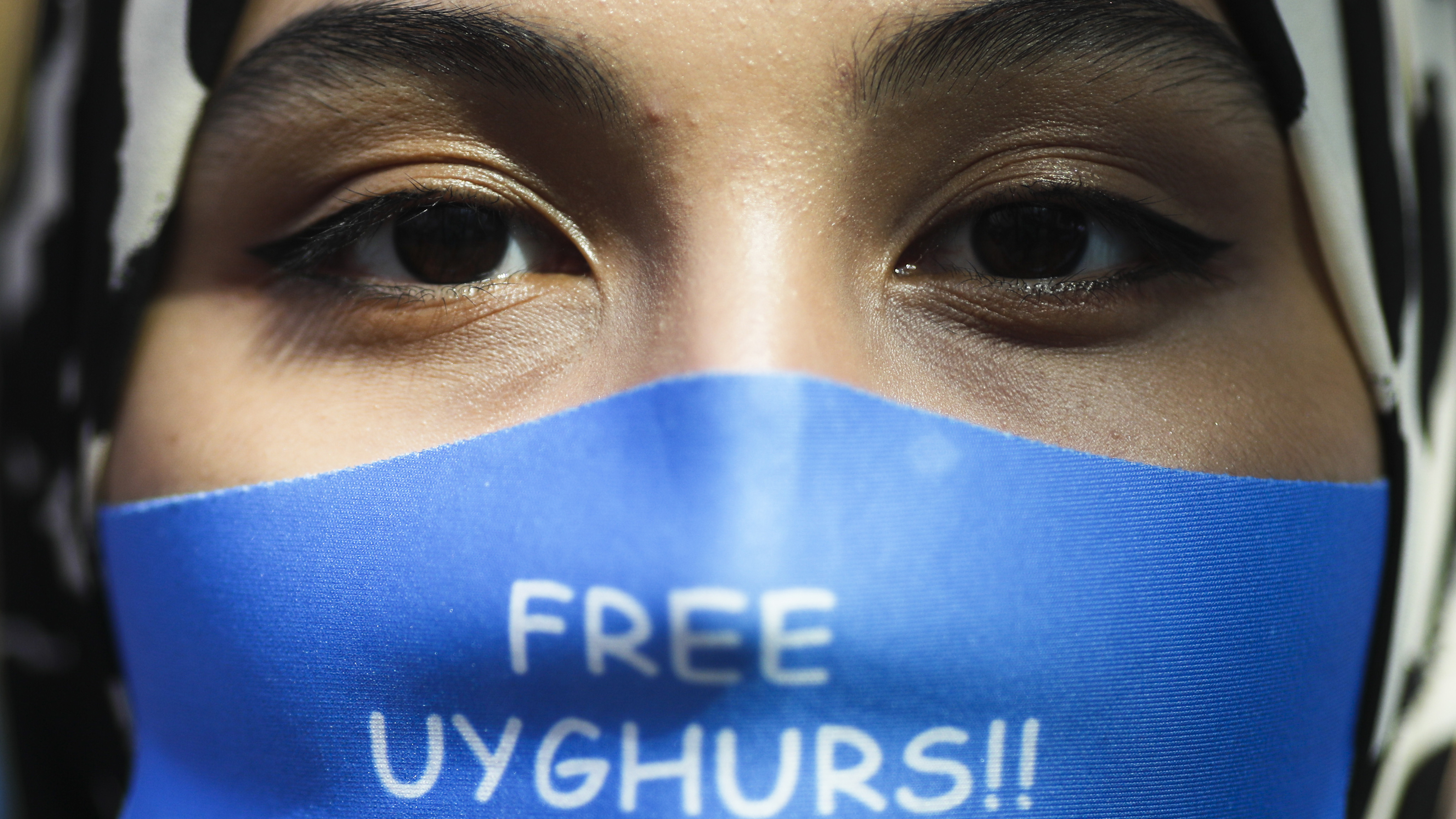 The Chinese Ambassador did say he wanted a “stable” relationship with Australia after the Chinese government slapped tariffs or bans on Australian coal, wine, barley, lobster, beef and timber.

Australia still remains in the diplomatic freezer, with warnings it might get colder down there.

The majority shareholder of the Ultimate Fighting Championship (UFC) is aiming for a US$10 billion ($12.9 billion) valuation in its initial public offering.According to documents released by Endeavor Group Holdings, the firm plans to sell an estimated 21.3 million shares in UFC for between US$23 and $24 per share.This will be the firm’s second attempt… 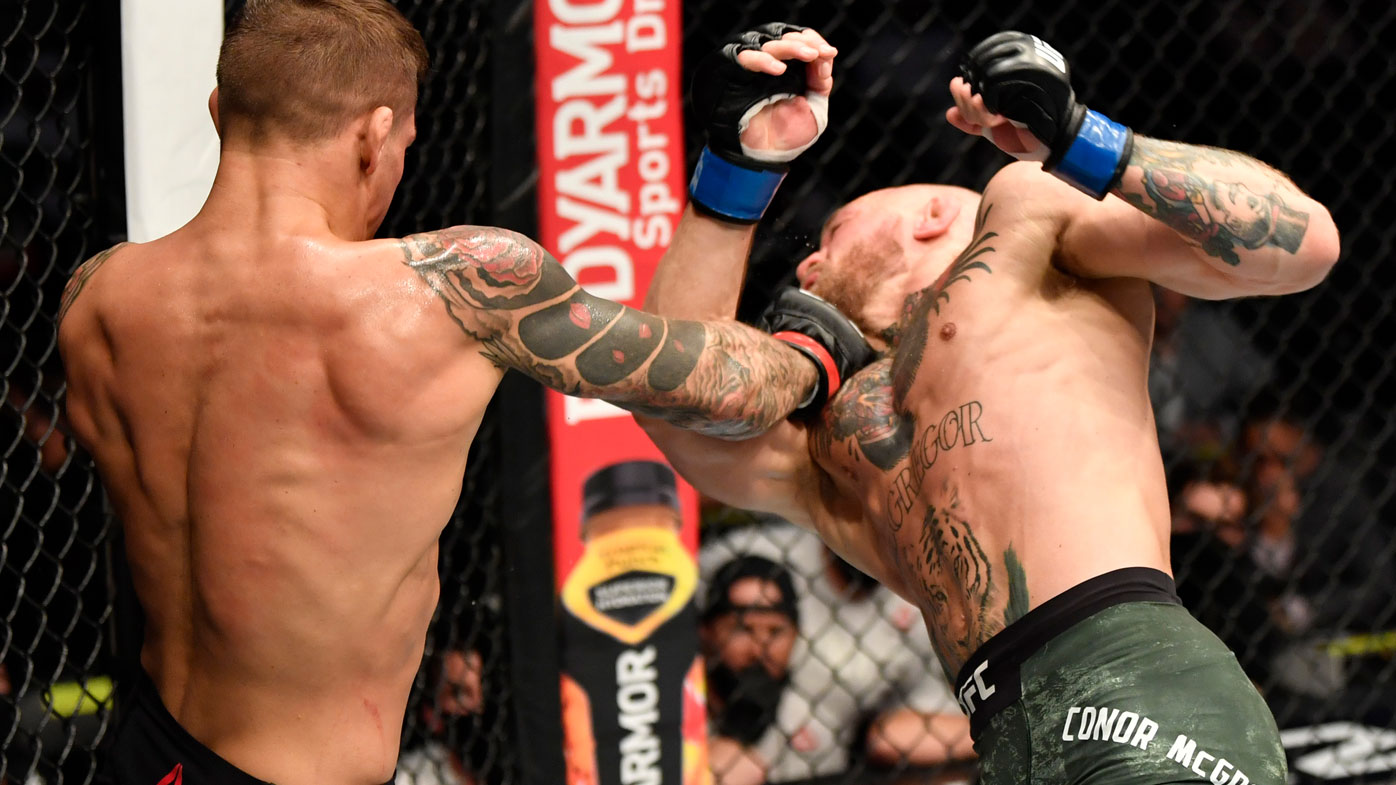 The majority shareholder of the Ultimate Fighting Championship (UFC) is aiming for a US$10 billion ($12.9 billion) valuation in its initial public offering.

According to documents released by Endeavor Group Holdings, the firm plans to sell an estimated 21.3 million shares in UFC for between US$23 and $24 per share.

This will be the firm’s second attempt at going public, with the valuation after failing in 2019.

READ MORE: Why Western Australia should cash in on controversial UFC

Endeavor plans to trade on the New York Stock Exchange under “EDR” and will also attempt to raise up to $1.3 billion (A$1.7 billion) from private investors including owner of the New England Patriots, Robert Kraft, and Abu Dhabi investment company Mubdala, according to Business Insider Australia.

US power broker Ari Emanuel, who founded Endeavor – then a talent agency – in 1995 and expanded it to include business, concerts, live events and sports, said the events of 2020 reminded him of the value of “premium intellectual property”.

“We believe being a public company will enable us to accelerate this mission and further the vision we set out in 1995 to build a company for where the world was headed,” Mr Emanuel said in the company’s prospectus.

Endeavor’s current major holdings include the UFC, Miss Universe Pageant and the WME Talent Agency, which represents the likes of Dwayne “The Rock” Johnson and Mark Wahlberg. 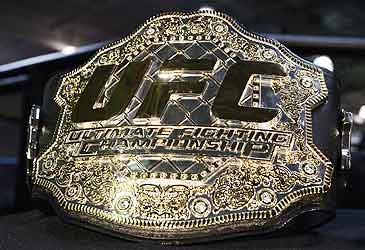 When the company attempted an evaluation in 2019, there was little to no investor demand and they were forced to abort a US$400 million ($518 million) share sale the day before it was set to go live.

In 2016, Endeavor bought the controlling stake in the UFC from casino moguls Frank and Lorenzo Fertitta for US$4 billion ($5.17 billion).

That same year they also advised they intended to acquire the remaining 49.9 per cent stake in the sporting organisation.

The Hawkesbury-based trainer is still deciding what to do with Adrian Knox Stakes winner Duais after her ripping run behind Hungry Heart when second in the Group 1 ATC Oaks last weekend.A Brisbane carnival tilt isn’t guaranteed though.“We haven’t made that decision yet. She has pulled up well and we’re going to keep her in…

The Hawkesbury-based trainer is still deciding what to do with Adrian Knox Stakes winner Duais after her ripping run behind Hungry Heart when second in the Group 1 ATC Oaks last weekend.A Brisbane carnival tilt isn’t guaranteed though.“We haven’t made that decision yet. She has pulled up well and we’re going to keep her in work for the next couple of weeks and see how she handles herself,” Cummings said.The Form: Complete NSW Racing thoroughbred form, including video replays and all you need to know about every horse, jockey and trainer. Find a winner here!“It’s been great for the stable, without a doubt, but moments like that typically leave you wanting more so I’m hungrier than ever.”At Newcastle on Thursday, Cummings is shooting for a winning double with first starter Three Wise Men and the ever-consistent Spanish Pearl.She runs in the sixth race and will be supported after placing or winning at every one of her seven starts this preparation.The problem is that she’s only won one of those races.“She’s very consistent but I want to win another race with her now,” Cummings said. “She continues to work really well at home. I’m conscience she’s had a number of starts.“It’s the first time she’s come back to fillies and mares grade.”The Reece Jones claim reduces her weight from 57.5kg to 54.5kg as he guides her from barrier six.Cummings will ask his rider to get her into her comfort zone which is on the speed.“She hasn’t drawn too badly but she’s shown she can overcome a bad draw with her natural speed,” he said.“It’s her first time going up to 1400m which will suit her. She’s bred to get that sort of a trip.”Three Wise Men is debuting in the opening race over 900m and he’s a two-year-old gelding by Divine Prophet.Cummings has given him two trials this time in after showing early promise on the track at home before going shin sore like a lot of young horses succumb to early on.“He’s looked like a real Magic Millions type last year after putting in some serious gallops but it’s taken a while to get him to the races. We’ve had to back off him due to a few niggles,” he said. “I think he could be a nice horse in the making but it wouldn’t surprise me to see him act immature in the run then see him improve off it.“I go in there with an open mind and there’s no pressure on him but we’d like to see him perform at his first day out.”Robbie Dolan will ride the young hose from barrier six and he’s expected to let the speed go slightly before finding the back of one and letting him down in the straight.“He can grab the bridle and go a bit so I think the speed will suit him. It’s going to be a sustained sprint and I think he’s capable of handling that trip and further,” Cummings said.“We’ll be positive and let the speed go the hopefully peel off one and go on with it.”SPRAGUE HAS DESIGNS ON REDEMPTION WITH PATTERNHe may give his trainer a few headaches but Stylish Pattern can help John Sprague avoid one with a with a win at Grafton on Thursday.The five-year-old lines up in a Benchmark 66 Handicap (1410m) and is looking for his fourth win at start 35.He’s comes off a fourth placing at this track a week ago, which Sprague was still trying to get over when contacted on Wednesday.“I’m still pretty upset he didn’t win his last start. I thought he would win at the 400m,” he said. “He’s going really good. Things didn’t work out last time but it was no-one’s fault, he just had no luck.”He has gate 11 of 12 but that’s seen as a positive by Sprague who said his horse would have the room to stride out and avoid traffic like last time and Luke Rolls rides him for the fourth time in a row which is key.“I don’t think the wide gate will worry him because he’s a big, striding horse. He was caught in behind them last time and there was nowhere to go. The gaps weren’t big enough,” Sprague said. “Luke is used to him now so everything might pan out for him now.“He’s a very hard horse to get around but when I had him as a young horse and he won two at Newcastle for me I thought he was a Highway horse.“He got an infection in his back hock and it’s taken so long to get him back to where we were again but I think I just about have him there.“I hope he wins this race so he’s not eligible for a Highway.”Sprague’s wife Karen is the sole owner of Stylish Pattern at the moment but he said she’s accepting of what happens on the track.“She just puts her hands in the air and leaves it all to me. We’ve leased him because I still think there’s plenty of potential still in him,” Sprague said.
Read More

Brisbane’s Gabba is set to receive a $1 billion refurbishment pending whether the city wins the 2032 Olympic Games. Sky News host Peter Gleeson said July 22 is “D-Day for the Queensland bid” and the state is currently in “targeted dialogue status”. “That means that the International Olympic Committee are only talking to Queensland right…

Brisbane’s Gabba is set to receive a $1 billion refurbishment pending whether the city wins the 2032 Olympic Games.

Sky News host Peter Gleeson said July 22 is “D-Day for the Queensland bid” and the state is currently in “targeted dialogue status”.

“That means that the International Olympic Committee are only talking to Queensland right now so we’re in the box seat”.

“The Gabba announced yesterday as the likely, well in fact the place where we will have the opening and closing ceremony”.

“One billion dollars, the structure as we know it now would be demolished and it would make way for this 50,000 seat stadium, it would completely transform that whole Gabba precinct.”
Read More